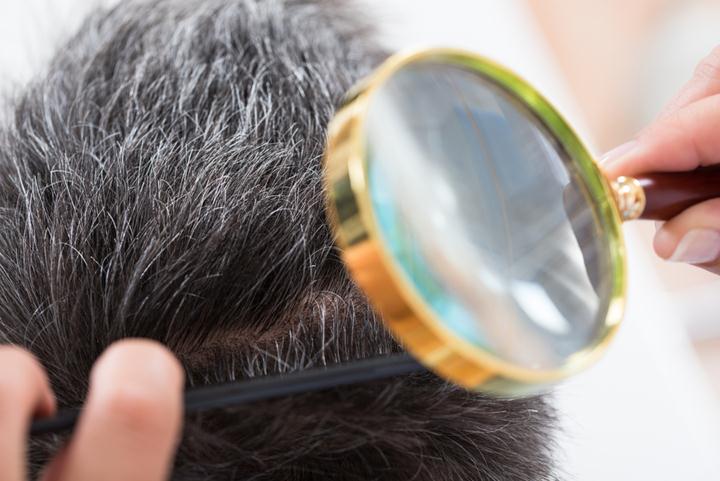 Scalp psoriasis is a form of psoriasis that primarily affects the scalp. However, in some cases, breakouts may extend beyond the hairline onto other areas of the head and face. This condition has no cure, but with proper treatment, most patients find that they are able to keep their symptoms in check and live relatively normal lives.

Below is a short overview of the condition—including its symptoms, causes, and how it can be successfully treated.

Like other forms of psoriasis, scalp psoriasis is marked by patches of bumpy, flaky scales, which in this case occur on the scalp and surrounding areas.

Sometimes these flakes appear as red patches, but for other patients they turn a silvery-yellow color. Regardless of the nature of these flakes, psoriasis breakouts tend to be itchy, and in severe cases, the skin affected by a breakout can actually crack and bleed as well.

While scalp psoriasis itself does not cause hair loss, many patients still experience it, since excessive scratching of the scalp can lead to it. Additionally, the stress of dealing with the condition may lead to further hair loss as well.

Because of the nature of this condition, sometimes scalp psoriasis is mistaken for a very severe case of dandruff. However, the flakes that occur with dandruff are simply due to a dry scalp and will not be as painful as those associated with psoriasis.

The cause of scalp psoriasis and other forms of the condition is still a bit of a mystery. However, research indicates that it probably has something to do with an irregular immune system response to skin cells. Normally, the immune system works to identify and destroy foreign agents in the body, but this process does not occur like it should in scalp psoriasis patients. Instead, their immune systems begin to attack and kill otherwise-healthy skin cells. When this occurs, dead skin cells begin to accumulate at a quick rate, which leads to the flaky buildup.

Why this process occurs, though, is unknown. There is some research to indicate that the condition may have a genetic basis, but there is also some evidence that points to potential environmental causes—such as stress, weather changes, or certain medications.

The first line of treatment for scalp psoriasis is typically some sort of topical product. Most commonly, it will be one that contains corticosteroids. This class of steroid helps slow down the growth rate of cells, which in turn helps to limit the size and severity of breakouts. However, long term use of corticosteroids can lead to some severe side effects, such as thinning of the skin, so they’re typically only used to treat current breakouts—not as a preventative measure.

In severe cases of scalp psoriasis, oral medication may be necessary as well. Most of these work by altering or suppressing immune system functions, so that it no longer attacks healthy skin cells. However, the effects from these types of drugs make patients more susceptible to other diseases that are kept in control by the immune system. They should only be used under close supervision by a doctor familiar with their side effects.

Some lifestyle changes may also be able to help with symptoms, but they should only have a supplemental role in treatment—they won’t be able to eliminate symptoms on their own. Things like using unscented moisturizers, taking daily baths, and spending time in the sun can reduce the severity of breakouts.