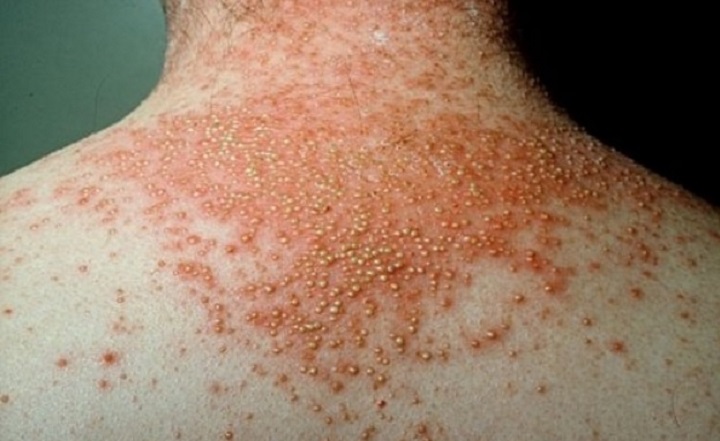 Psoriasis is an autoimmune disorder that results in red, inflamed, and scaly patches on the skin. Psoriasis can affect anyone, and about 7 million people in the United States have psoriasis. Psoriasis is not a contagious disease, but the exact cause of the condition is still a bit of a mystery.

Although psoriasis does not have a cure, there are many treatment options available to lessen its symptoms and improve people’s quality of life. While psoriasis patches or lesions may appear on any part of the body, the elbows, knees, hands, feet, and scalp are the most commonly affected areas.

There are six types of psoriasis, and one of the more common ones is pustular psoriasis.

Pustular psoriasis causes raised, small, white or yellowish bumps/lesions that are filled with pus on the skin, which first becomes red and sensitive.

There are a number of factors that may contribute to recurrences and severe symptoms. Some of these triggers are:

– Steroids, penicillin, lithium, and some other medications

– Too much exposure to sunlight

There are three types of pustular psoriasis;

Von Zumbusch psoriasis is also referred to as acute generalized pustular psoriasis and is the most severe and painful type. It causes large patches of blisters that are red in appearance and filled with pus. Von Zumbusch causes fever, severe itching, and joint pain. However, rehydration, topical treatments, and antibiotics work to relieve the symptoms.

Palmoplantar pustular psoriasis is easier to detect as it occurs on the palms of the hands and soles of the feet. The patches appear red initially but then darken, peel off, giving them a cracked appearance.

Palmoplantar may cause inflammation in the affected areas and affects women more than men. Palmoplantar often requires more than one method of treatment, such as combining light therapy and topical medicines with immunosuppressant drugs.

Acropustulosis is the rarest type of pustular psoriasis and primarily affects the toes, fingers, and even underneath the nails. Since the condition is quite rare, it is often treated using a combination of medicines and treatment methods.