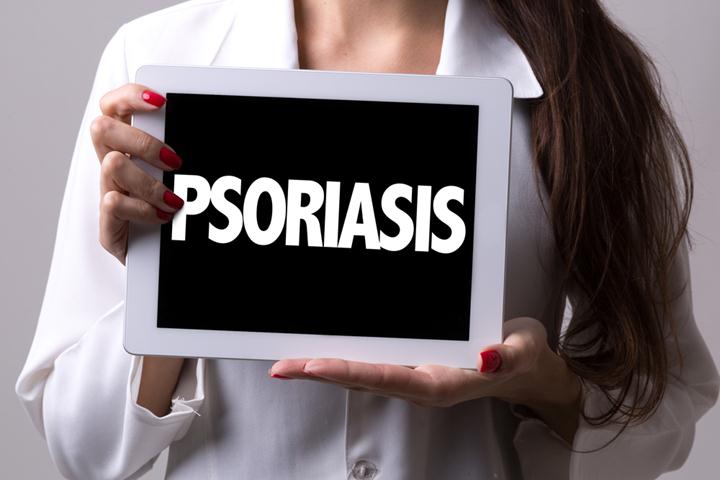 Psoriasis is a chronic condition in which skin cells growing too quickly. The result is large patches of red, raised skin, skin scales, and flakes of dry skin. People with psoriasis may see symptoms that range from mild to severe, depending on other factors in their environment, such as cold, dry climates, infections, stress, dry skin, and taking certain medicines. Your specific symptoms will also depend on which type of psoriasis is affecting you.

Treatments for psoriasis will vary depending on the type and severity of your particular condition, so it is important to work with your doctor to find a treatment that will reduce or eliminate your personal symptoms.

The most common form of psoriasis is plaque psoriasis.

This form is characterized by large patches of raised, red skin that are covered with a silvery-white buildup of dead skin. These patches (also referred to as plaques) will usually appear on the scalp, knees, elbows, and lower back.

Guttate psoriasis is characterized by small, teardrop-shaped, red, scaly spots that show up on the arms, legs, and middle of the body. It is also sometimes associated with other underlying conditions, such as strep.

Just like the name suggests, inverse psoriasis affects the inner folds of your body. You will develop red, shiny patches only in certain places, such as in armpits, around the genitals, between the buttocks, and under the breasts in women. This form usually does not have the scaling associated with plaque psoriasis because it only appears on smooth areas of skin. Inverse psoriasis is usually more frequent and severe for people who are overweight, because it occurs in skin folds that are particularly prone to irritation from rubbing and sweating.

Pustular psoriasis is one of the least common forms of psoriasis. It appears as clearly defined, raised bumps filled with thick, white fluid. This fluid is composed of white blood cells, also known as pus. Your skin around and under these bumps will be red. This kind of psoriasis can be intensely painful and may even require hospitalization.

The least common form of psoriasis, erythrodermic psoriasis is also the most inflammatory and it often affects most of your body’s surface. If you have unstable plaque psoriasis, meaning your lesions are not clearly defined, you are more susceptible to developing this form of psoriasis. It is characterized by periodic, widespread, fiery redness of the skin. The reddening and shedding of the skin often result in severe itching and pain, as well as occasional swelling.

Psoriasis can also affect the fingernails and toenails, which in turn causes pitting, thickening, and irregular contour of your nails. Most of the time, nail psoriasis goes hand in hand with other forms of psoriasis. People who suffer from psoriatic arthritis, a condition that produces symptoms of both psoriasis as well as arthritis, usually also suffer from nail psoriasis.