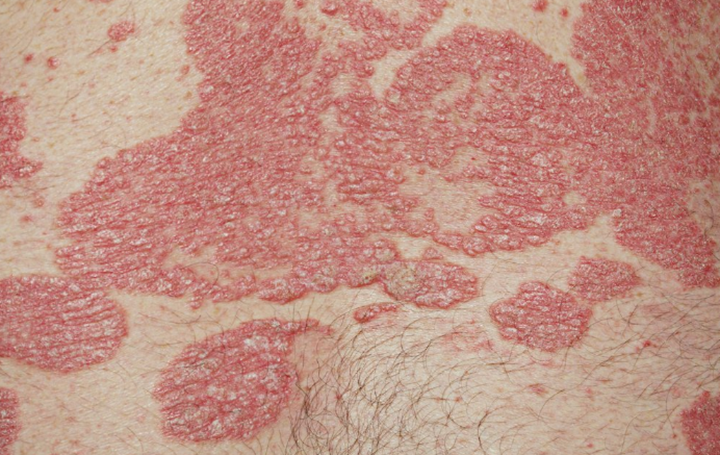 Skin lesions caused by psoriasis can range from a few spots on the skin to major breakouts that cover large areas.

Symptoms can last for a few weeks or months before subsiding and coming back again. In some cases, those with psoriasis can go into complete remission, while in severe cases psoriasis can last years or even cause complications like psoriatic arthritis.

As mentioned, psoriasis symptoms are dependent on what type of psoriasis you have. There are several types of psoriasis:

This type of psoriasis is the most common. It is characterized by dry and silvery scales that have well-defined edges. The skin beneath and surrounding the scales is red. These lesions can appear anywhere on the skin but typically occur on the scalp, knees, elbows, and/or lower back. The affected areas can be painful or itchy, and can over small or large areas.

While not really a form of psoriasis by itself, often those with any type of psoriasis will experience nail psoriasis. Fingernails and/or toenails appear pitted and ridged, have abnormal growth, and have discoloration. The nails may loosen and separate from the nailbed; in extreme cases, the nail can crumble.

Guttate psoriasis is mainly seen in young adults and/or children and is usually triggered by a bacterial infection — for example, strep throat. It is characterized by small, tear-drop shaped lesions that cover large areas of the torso, arms, legs, and/or scalp. They are not as think as plaques found in plaque psoriasis.

This psoriasis typically affects inner skin — areas of the body such as armpits, the groin, under breasts and/or around genitals. They show up as smooth patches of red and inflamed skin. These symptoms worsen with friction and sweating.

This is a rare type of psoriasis and develops very quickly. It is characterized by tender and red skin with bumps that are blister-like, filled with pus. The bumps usually appear several hours after the skin turns red. This can occur anywhere on the body in widespread patches — this is called generalized pustular psoriasis — or in smaller areas on the hands, feet, or fingertips.

Other symptoms of pustular psoriasis can include fever, chills, severe itching, and/or diarrhea.

This type of psoriasis is the least common but can be the most severe and painful. The body is covered entirely with a red rash that peels and can cause severe itching or pain. In some cases, the pain can be so severe that the inflicted person may have to be hospitalized.

If you have any of the symptoms mentioned above, see a doctor immediately. Also, see your doctor for an examination if you have developed a rash that is not going away.

If you have psoriasis, talk to your doctor about treatment options if:

If symptoms worsen or do not improve your treatment, contact your doctor again — you may need different forms or combinations of treatment.

Psoriasis is seen as an autoimmune disease rather than a skin disorder because the cause is suspected to related to a problem with the immune system that involves T-cells and other white blood cells (neutrophils).

When you have psoriasis, the skin cells in your body grows twice as fast as normal, and the T cells attack the healthy skin cells by mistake. As more skin cells grow and T cells continue to attack, the cycle causes the skin to become red and buildup of skin cells that shows up as thick, scaly patches on the surface of the skin.

Researchers and doctors are unsure of what cause T cells to malfunction in people with psoriasis, but genetics and environmental factors are believed to have a part in it.

Psoriasis can start or worsen from a trigger. What triggers psoriasis varies from individuals, but general triggers are:

While there is no way one can prevent from developing psoriasis, there are some factors that can increase the risk of developing the disease. Some of these factors are:

If you have a relative with psoriasis, this can increase your risk of developing the disease. The risk is higher if one or both your parents have/ have had psoriasis. Genetics is suspected to be a large factor in why some people have psoriasis.

This is one of the triggers that can cause psoriasis to start. This is especially true if you have another autoimmune disease like HIV. Children and young adults who are prone to infections — especially strep throat — can be at an increased risk as well.

High-stress levels can impact the immune system, and thus can increase the risk of you developing psoriasis.

While all types of psoriasis often develop in skin crease and folds, you are at a higher risk of developing inverse psoriasis because it is worsened by friction and sweating.

This not only increases risk of developing psoriasis but may also play a part in increasing the severity of it.

If you have psoriasis, there is a greater risk of you developing other diseases as well. These can include:

Psoriatic arthritis – This can cause joint damage, loss of function, and even permanent damage.

Eye conditions – Inflammations that occur on certain parts of the eye — disorders such as conjunctivitis, blepharitis, and uveitis — are more common in people with psoriasis.

Type 2 diabetes – The more severe your psoriasis is, the greater risk you have in developing type 2 diabetes.

Parkinson’s disease – If you have psoriasis, you may be more at a risk of developing Parkinson’s.

Kidney disease – Those with moderate to severe psoriasis have a higher risk of kidney disease.

Emotional problems – Because psoriasis can affect your quality of life, it is often associated with low self-esteem and, in extreme cases, depression. It is also more likely for you to withdraw socially.