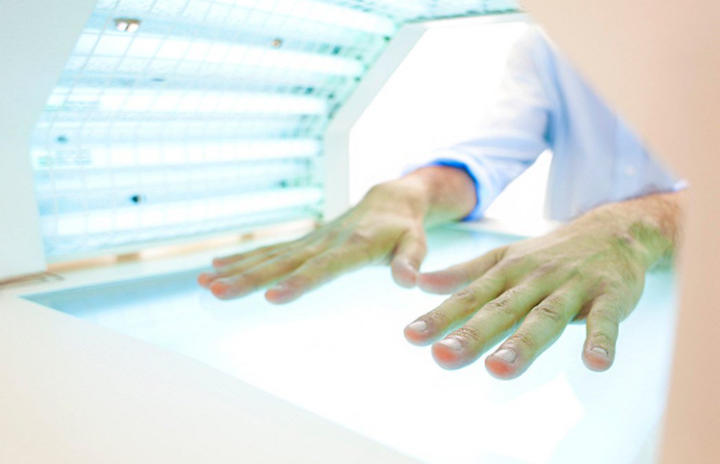 Although there is currently no known cure for psoriasis, there are a number of treatment options for to help relieve some symptoms or even allow for others to go into full remission. Traditional treatment of psoriasis can be divided into three main types of treatment: topical treatments, light therapy, and systemic medications.

Some topical medicines for psoriasis can include:

These are creams and/or ointments that contain steroids.

It is the most common treatment for mild to moderate psoriasis, helping to reduce inflammation and relieve itching. Milder forms of corticosteroid ointments are typically used for sensitive areas such as the face or skin folds, as well as for treating large areas of damaged skin. Stronger corticosteroid ointments are used to treat areas that are smaller, less sensitive, and/or have inflammation that is harder to get rid of.

Keep in mind that long-term use and/or overuse of strong corticosteroid ointments can cause the skin to thin out; as well, the treatment may stop working after a period of time. As such, topical corticosteroids are typically used to treat psoriasis that is more short-term.

This helps manage psoriasis by slowing down skin cell growth. An example of such a topical medicine is calcipotriene (Dovonex), a prescription cream/solution that contains vitamin D analogue. Be cautious when using this cream, however, as calcipotriene is known to irritate the skin.

Another option of using vitamin D analogue is calcitriol (Vectical), which is more expensive than calcipotriene. It is equally effective compared to calcipotriene but is less irritating.

Like vitamin D analogues, anthralin helps slow down skin cell growth. As well, anthralin (Dritho-Scalp) can also remove scaling caused by psoriasis, making the skin smoother and can even provide relief to symptoms like itching.

However, anthralin can irritate the skin and cause staining, thus it can only be applied for a short time and then washed off.

This medication is essentially vitamin A derivatives that can help decrease inflammation. Like many topical medications, skin irritation is one of the most common side effects. Additionally, the medication can also increase sensitivity to sunlight.

Topical retinoids carry a lower risk of birth defects than oral retinoids; however, tazarotene (Tazorac, Avage) is not recommended for people with psoriasis that are pregnant, breastfeeding, or intend to become pregnant.

Calcineurin inhibitors such as tacrolimus (Prograf) and pimecrolimus (Elidel) help reduce inflammation and buildup of plaque. The medication can be particularly useful for treating areas of thin skin where lesions occurred.

This type of topical treatment is not recommended for long-term or continuous use, as it can cause an increased risk of skin cancer and lymphoma.

Salicylic acid helps in the removal of dead skin buildup and thus reducing scaling. It is available over-the-counter as well as by prescription and is sometimes used with other topical medications to increase effectiveness.

There are also medicated shampoos and scalp solutions with salicylic acid to help treat scalp psoriasis.

This medicine helps reduce scaling, itching, and inflammation. It is available over-the-counter in shampoos, creams, and oils; by prescription, coal tar is available in a higher concentration. While it may be effective in treating psoriasis, coal tar can irritate the skin, cause staining, and have a strong odor.

Coal tar is not recommended as a treatment for people with psoriasis that are pregnant or breastfeeding.

While it is technically not a medicine and does not necessarily aid in healing psoriasis, moisturizers can reduce itching, scaling, and dryness. Moisturizers in an ointment base are typically more efficient in managing psoriasis symptoms than lighter creams and/or lotions. It is recommended for people with psoriasis to moisturize right after a bath or shower in order to lock in the moisture and natural skin oils.

The most simple form of phototherapy is to let your skin have controlled exposure to natural sunlight. Daily exposure to sunlight for short periods of time can help heal psoriasis; intense sun exposure, on the other hand, can worsen psoriasis and cause further damage to the skin.

Before opting for this treatment, it is essential for you to consult your doctor and get feedback on the best and safest way to approach of this form of phototherapy.

Controlled, medically supervised doses of UVB from an artificial light source can help improve symptoms of mild to moderate psoriasis. This phototherapy can be used to treat psoriasis that occurs in small patches or large areas of the skin. It is also an effective treatment if your body is not responding to topical treatments.

This type of psoriasis treatment is a bit newer, and have shown to be a bit more effective than UVB phototherapy. A course of treatment usually include doses of UVB two to three times a week until the skin improves, and then you go into maintenance. Maintenance typically only require weekly sessions.

A downside of this type of phototherapy, however, is that it may cause more severe burns that last longer than regular UVB phototherapy.

This is a therapy that combines UVB phototherapy treatment with coal tar treatment. When combined, treatment of psoriasis becomes more effective, because coal tar makes the skin more responsive to UVB light.

This is a more aggressive form of treatment is often used for more severe cases of psoriasis because UVA light goes deeper into the skin than UVB light. It includes taking a light-sensitizing medication called psoralen before being exposed to UVA light from an artificial light source. This is because psoralen makes the skin more receptive to the UVA light.

This treatment is essentially beaming only the affected skin lesions with UVB light so that healthy skin is not harmed. It is used to treat mild to moderate psoriasis, typically those who only have small affected areas.It usually requires fewer sessions of excimer laser therapy before the skin improves when compared to traditional phototherapy, as a more powerful kind of UVB light is used.

Some side effects of this treatment include redness and blistering.

For severe forms of psoriasis or psoriasis that are resistant to topical or phototherapy treatments, oral or injected drugs may be prescribed. This type of treatment is known as systemic treatment and can cause severe side effects. Because of this, treatment usually only lasts for brief periods of time or be switched off between other forms of treatment.

Related to vitamin A, retinoids are typically taken if you have serious psoriasis that does not respond to other forms of therapies. Some side effects of the drug are lip inflammation and hair loss. As well, the drug can cause severe birth defects; thus those who take the medication must avoid pregnancy for at least the next three years.

Methotrexate (Rheumatrex) is taken orally (pill/liquids), and aids in the decreasing of skin cell growth that occurs in psoriasis and reduces inflammation. The drug can also help slow down the development of psoriatic arthritis.

In small doses, methotrexate is typically well-tolerated by those that take it, however, some short-term side effects may include upset stomach, loss of appetite, and fatigue. If the drug is taken long-term, side effects get more serious and can include severe liver damage as well as decreased production of red and white blood cells and platelets.

This drug (Gengraf, Neoral) helps repress the functionings of the immune system, and is similar to methotrexate in its effectiveness and recommended short-term usage. Like other drugs that repress the immune system, cyclosporine can increase the risk of infection and other illness and health problems, including cancer. Additionally, the drug also increase risk of kidney problems and high blood pressure.

For people with moderate to severe psoriasis who have failed to respond to all other kinds of traditional treatments and/or therapy or have associated psoriatic arthritis, these drugs might be prescribed. Most of the drugs are given by injection (with the exception of apremilast), and they include etanercept (Enbrel), infliximab (Remicade), adalimumab (Humira), ustekinumab (Stelara), golimumab (Simponi), apremilast (Otezla), secukinumab (Cosentyx), and ixekizumab (Taltz).

These drugs (biologics) should be used with caution, as they can have a serious effect on the immune system and increase the risk for life-threatening infections. Specifically, people who are on this treatment have to be screened for tuberculosis.

When other drugs cannot be given, thioguanine (Tabloid) and hydroxyurea (Droxia, Hydrea) are used to treat psoriasis.

While treatment is dependent on the type and severity of psoriasis as well as the areas of skin affected, typically the approach to treating psoriasis is to start with the milder form of treatments (topical creams and phototherapy) before progressing to more aggressive treatments via oral/injected medicines and/or a combination of treatments. Exceptions are made for those who have pustular or erythrodermic psoriasis or associated arthritis; systemic therapy is usually needed from the very start of treatment.

The ultimate goal for both your doctor and yourself when considering treatment is to get the most effective way to slow down skin cell growth (reducing redness, pain, itching, etc) with as little side effects as possible.

There is new research on ways to treat psoriasis. These research include treatments that target proteins that work with the immune system.

Besides traditional medication, there are other alternative ways to help manage the symptoms of psoriasis. Keep in mind that while these treatments can help reduce signs and symptoms, they have not been proved to be definitively effective. Before using any of the alternative medicines, consult your doctor to see if it can fit into your actual treatment without being harmful. Your doctor can also help you consider the positive and negatives of each alternative therapy.

These types of medicines are most suited for those with a mild form of plaque psoriasis.

Omega-3 fatty acids that are found in fish oil supplements can aid in treating inflammation — but results are mixed, and thus is definitely not a treatment that is definite. However, taking 3 grams or less of fish oil daily is generally pretty safe, and can be beneficial to your health regardless.

Topical applications of Oregon grape, or barberry, may help reduce inflammation and other symptoms such as itchiness and redness.